This article has been archived from voces-magicae.com​

As the Catholic Church became a political institution it simultaneously distanced itself from the Pythagorean sciences inherited by the early Christian initiates. Primarily threatening to the ecclesiastic spiritual hegemony was the doctrine of gnosis that taught that we are all “sons of God�? and can all share intimate experiences with divinity without a mediating institution. The Church responded by quantifying spirituality and declaring Gnosticism a heresy.

As masterfully explained by David Fideler in “Jesus Christ Sun of God” (1993), the original doctrine of the Christian logos was related to the doctrine of gnosis and to the Pythagorean teachings of universal harmony (Harmonia). Greek logos was poorly translated into Latin as verbatum and then finally into English as ‘word’ whereby it lost all meaning.

In Greek, logos has several meanings: order, pattern, ratio, reason, mediation, and harmony. Only in the most mundane and topical sense does logos mean “word” (or more precisely oration, or ‘spoken word’). But even in the meaning as ‘word’, our English equivalent misses the mark. We must of course place the spoken ‘word’ in traditional context as an act of cosmology. This is evident in the magical properties of the spoken divine names of the Hebrew Kabbalah, the mantras of Vedas, and the formulaic nomina barbara of Greco-Egyptian magic. 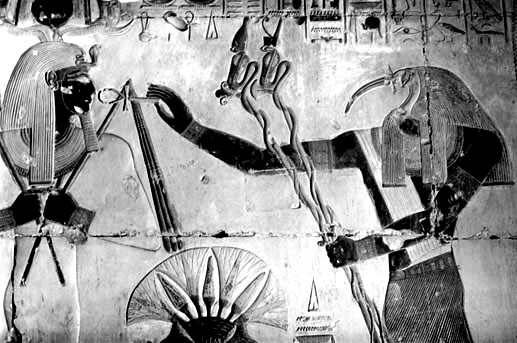 ​
The doctrine of logos can be traced back to ancient Egypt , and in particular to Thoth as the patron god of speech, writing, wisdom, astronomy, mathematics, music, medicine, and magic. In fact, among his dynastic period (c. 3000 – 330 BCE) epithets was ‘Lord of Ma’at (Order)’, ‘Lord of Divine Words’. And ‘Tongue of Re’, associating him with the ordering process of creation ; for in Egyptian cosmology the Sun god Re by speaking the divine names of the gods created and set the universe in motion.

In a wall painting from the tomb of Seti in Abydos (above), Thoth- as psychopomp- initiates the Pharaoh into the mysteries of death by performing the “Opening of the Mouth Ceremony”. This magical rite grants Seti the logos of divine speach so that his soul may recite the necessary God-names to cross the gates of the Duat and ascend to eternity and immortal spiritual existence.

Thoth was later called Hermes by the Hellenized Egyptians (the Hermetic Philosophers) who saw in him the same principle of Gnostic revelation and logos that the early Christian’s saw in Christ. In the Corpus Hermetica, attributed to the Hermes Trismegistus – the third incarnation of Thoth, we find explicit references to logos as the ordering principle, as the “son of God�?, and as the Shepard of man (poimandres).

‘That Light.’ [Poimandres] said, ‘is I, even Mind, the first God, who was before the watery substance which appeared out of the darkness; and the Logos which came forth from the Light is son of God.’… ‘Learn my meaning,’ said he, ‘by looking at what you yourself have in you; for in you too, the logos is son, and the mind is father of the logos’…The watery substance, having received the Logos, was fashioned into an ordered world (Kosmos), the elements being separated out from it…’ (Corpus Hermetica, Libellus I)
Click to expand...

Throughout the classical Greco-Roman world (c.a. 800 BCE – AD 500), the teachings of logos were transmitted by the initiates of the Orphic-Pythagorean Mysteries and later with the Mithraitic, Bacchic, and early Christian Cults. The initiates into these Mysteries learned the Pythagorean universal harmonia of mathematics, astronomy, geometry, and music. Through mythic symbols and mythic narratives, the patterns and underlying order of Kosmos was unveiled to the initiate as perpetual manifestation of harmonic logos.

For the initiated into the doctrine of logos the knowledge of Harmonia is beyond mere episteme; it is an ontological experience directly related to the nature of being. To understand and know the universe, one has to first understand and know oneself.